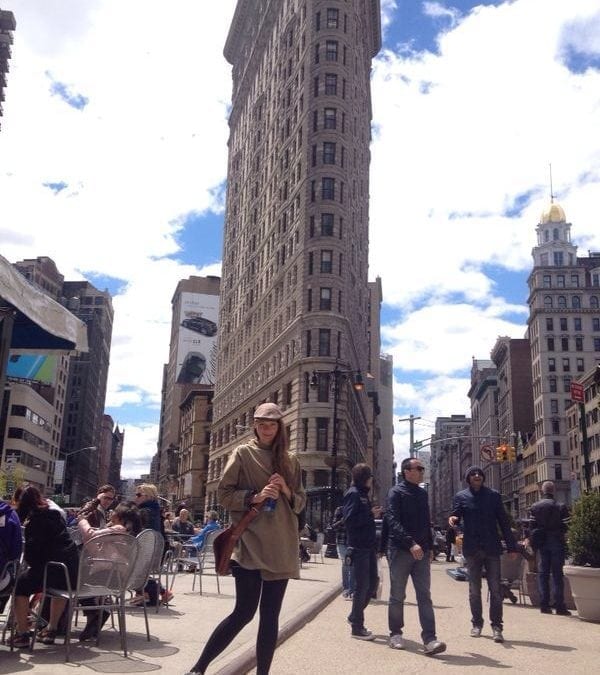 So, as usual I ponder over the theme of the week in the studio. I love it. It is food for thought: memories, stories, philosophies, feelings… all sorts come up.
This blog, written a few years ago, was at the beginning of a long trip I took. I had left my job, bought a worldwide ticket and kicked back in my hometown and a couple spots in Europe for 2 months before I took my first flight on my golden ticket.  Then, the day came and I started my trip. I flew from London to New York. I spent a whole year, not totally knowing where I was going In reflection my feelings of being lost were much to do with being in the first days of a year long trip around the world. I was literally starting to wander down a long path, into a forest of unknown. Some destinations in sight, clearings in the paths but not many plans. I had to get comfortable with all the spaces in between and the darker parts of the forest.
So I invite you to step back with me a few years into my past and see if these feelings of lost and found are something you know too… “That morning he had known everything that was going to happen to him as he walked through the familiar fields. But now, as the sun began to set, he was in a different country, a stranger in a strange land, where he couldn’t even speak the language.” The Alchemist
Admittedly, I am a bit of a martyr when it comes to travelling and coping with transition. I soldier on and try not to let time zones, new climates etc impact negatively (but I am not embracing carrying the heavy backpack), settling quickly and adapting to surroundings. So after a weekend that involved an emotional departure from Holland on a Saturday morning, a day and night in London and then a Sunday flight for an evening arrival in NYC, I should perhaps allow myself to feel somewhat jet-lagged and out of sorts. I felt (I don’t like to say it) lost. I had to keep my game face on in order to make it through immigration and make my way to Lydia’s Manhattan abode. This leg of the journey was not over yet! 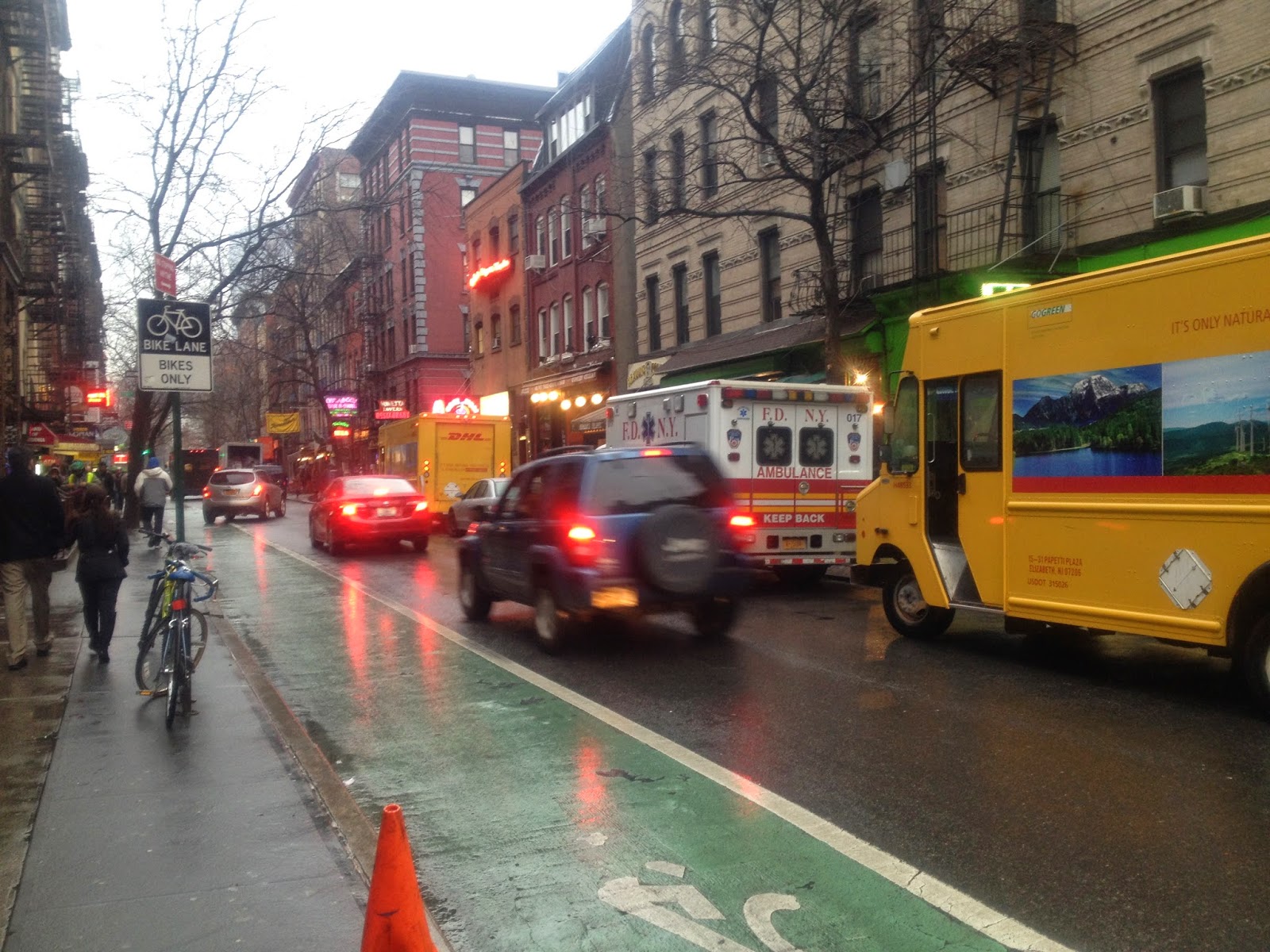 Immigration I anticipated problems; the queues are known to be horrific, interrogations difficult and I was a little worried as I had no set departure or ticket date showing I would be leaving the U.S. However, I sailed through even offered a ‘Have a nice stay, Ma’am,’ and a smile. JFK was heaving (not like the empty airport I had arrived in on the brink of Hurricane Sandy) and the taxi queue was not so pleasant. It was chucking it down, and although rain is preferable to an imminent hurricane, it turns out that at least with a hurricane there is an empty airport and highways devoid of traffic. This line up was pretty intense. I had no American currency (just like when I arrived in Morocco), so with bags awkwardly in tow, I negotiated that and then engaged in conversation with a couple from Chicago that were kicking off about an Italian couple pushing in front of them. I think they wanted me to engage in their (loud) disapproval but I felt a little British about it and skirted around their objections. Instead, they enlisted the vocal support of someone working for this taxi queuing system, who was doing a thorough job of policing the line. She had just missed these two, who I really don’t think intended to push in line! Woooooahhhhh. People, people everywhere. Shouts in those New York accents of buses available to downtown. Shouts to keep the line moving. Shouts informing us to be prepared for the rain outside. The energy seemed absolutely bonkers and the guy from Chicago continued on a tirade about his experience of queuing in different countries. His wife was ignoring him and I felt obligated to politely engage.

A long taxi ride later, clutching my address book, my phone dead (battery eaten from all the airport phonecalls) I made my way to Lyd’s. So many people had asked me where she lived now- I don’t know, I know it isn’t Queens anymore but other than that… Well, baby, she has an apartment on the upper West side, just off Broadway, in Manhattan! All that stuff we hear about on T.V about yearning after rent controlled apartments is, in fact, true! And lucky Lydia had found one. So when I dragged my backpack out of the cab (bedraggled and rained on in the process), onto the doorstep of 306, 105th Street and rang Apartment 4, I was relieved to hear a Lydia shriek from the intercom and then see a Lydia flying down the stairs to welcome and rescue me from the rain.

Although I felt a mess, Lyd marvelled at how well I looked after all the travel and such a busy weekend. We realised that the freckles and colour I had got from my time on the doorstep at Overtoom 32 must be the answer. Lyd was automatically apologetic that her doorstep may not provide the fun that Eve’s doorstep had. As we set out for spinach dumplings, noodles and a trip to the grocery store, we both noted that the doorstep could not rival that of Eve’s because the scaffolding would keep any sun at bay and it was also directly beside the garbage cans. Lyd, not to worry, a NYC doorstep haunt was not a pre-requisite for my visit! We may not have Vondel Park around the corner, but we do have Central Park and Hudson River Park. Honestly Lydia, you do not have to sell it to me- I am already sold. If a little lost- immediately exemplified by our trip for groceries. You want almond milk- a million different kinds! Oats? Cinnamon? Nuts- shelves full to choose from…All things in abundance! Lyd warns me that fresh vegetables and fruit behave very strangely here and we select produce with some caution. Staff everywhere! Sooooooo many choices and counters full to the brim. And open 24 hours. And delivery for orders over 20 bucks. Items chosen amidst broken dialogue and flitting between conversations and topics (a perpetual problem of mine and Lyd’s- we have been known to make a list of all conversations we need to complete!), our groceries packed in both plastic and paper, we made our way home to our Upper West Side apartment. Lots of chatting, planning and laughing, we finally settled in for a night of slumber.

The following morning we took an obligatory trip to the local diner. A quintessentially American experience and soooo goood! Lyd’s blueberry pancakes were rather enviable but my home fries and 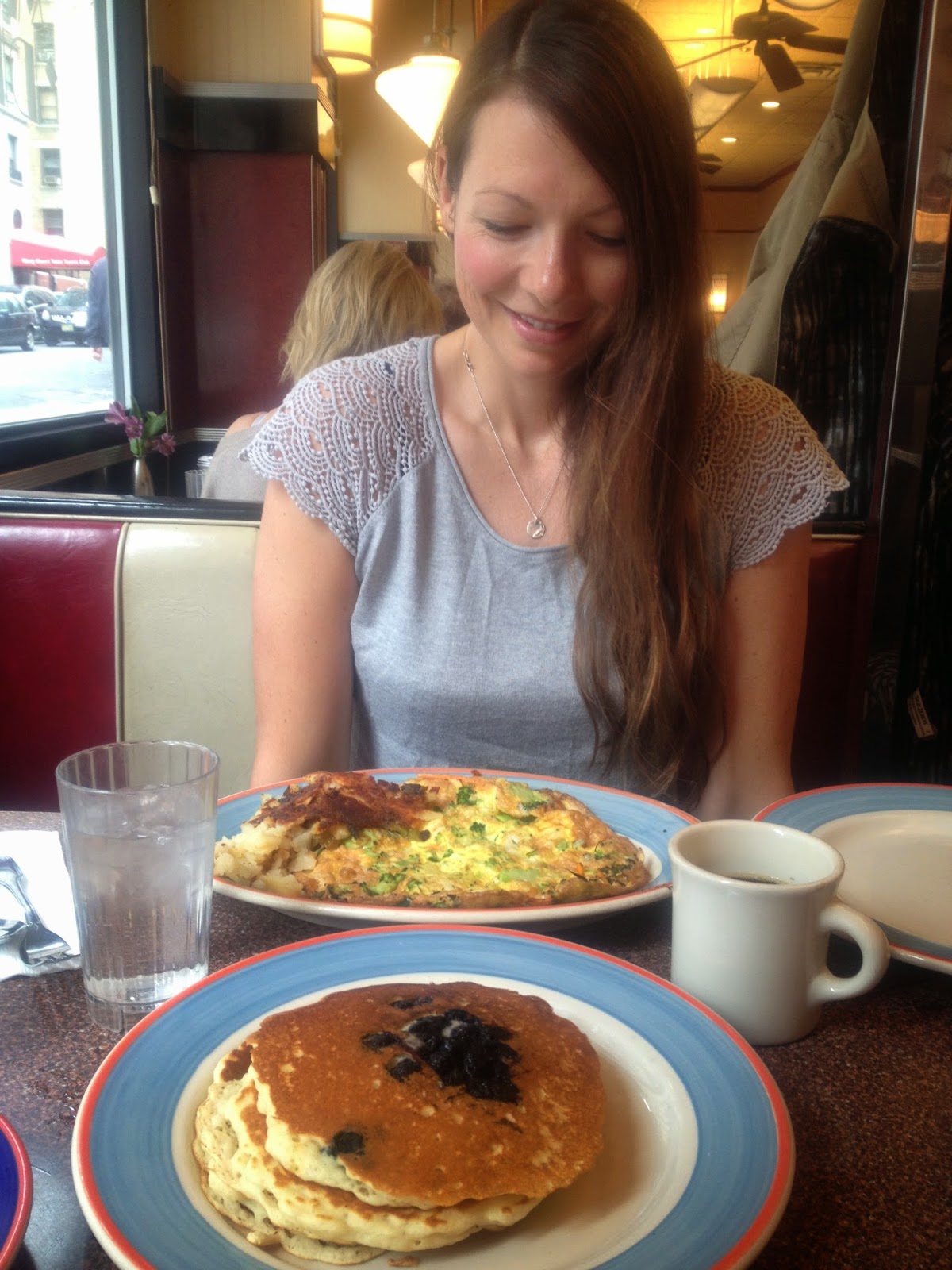 omelette super tasty too. Fortunately we both are good at sharing. Spring was just springing here in New York so we made the most of it, covering the area on foot. A long walk down Broadway, followed by a trek through Central Park and then cake break nearby to home in a Hungarian cafe. I realised I was pretty tired and overwhelmed. Everything seemed surreal. And it continued to feel this way for the next few days. We sketched out the following weeks and marked events on the diary, made lists of what to do. Now, as I write in retrospect, I realise that there was a lot to take in. New York is like an assault on the senses. Just like everyone has described as well, is that odd thing, that you feel like have you been here or know it because of the exposure of the city in films and television. Lydia is the perfect guide but she could not hold my hand through it all ( and has a demanding and varied job), so I attempted to soldier through. 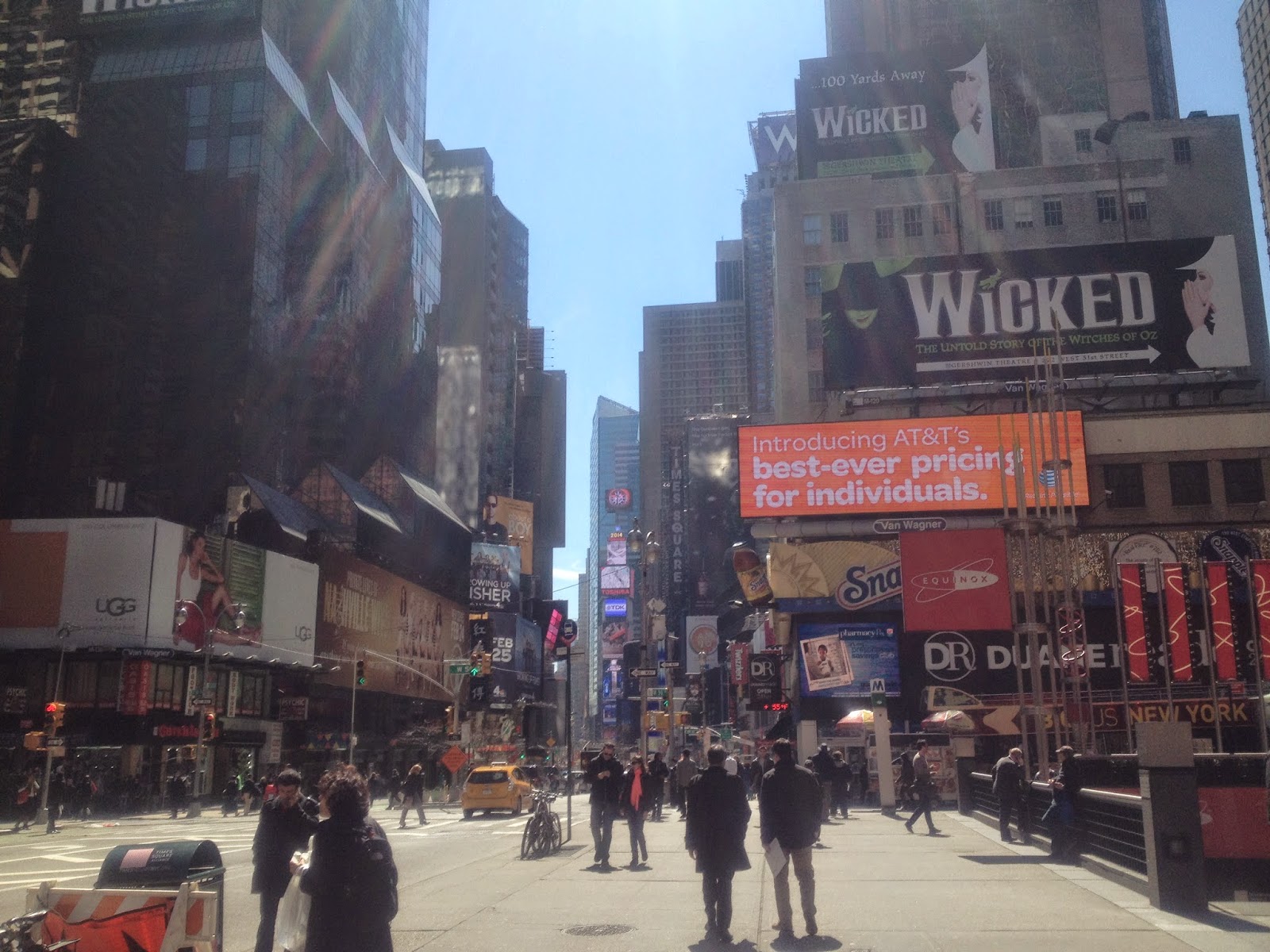 I ran through Hudson River Park; I felt out some good yoga after researching online the endless possibilites here, signing up for a week of classes (Ella Gray, you are right- yoga everywhere and I just had to go on gut feeling); worked as a volunteer in the Bronx, helping children with their homework; found a tiny Juice Bar 2 blocks away (was missing my daily carrot juice with my Roomie); managed to get myself around on the subway; walked A LOT, navigating through the grid and block system; sat on random stoops and streets; listened and watched, somewhat mesmerised. I felt, I guess, not connected. 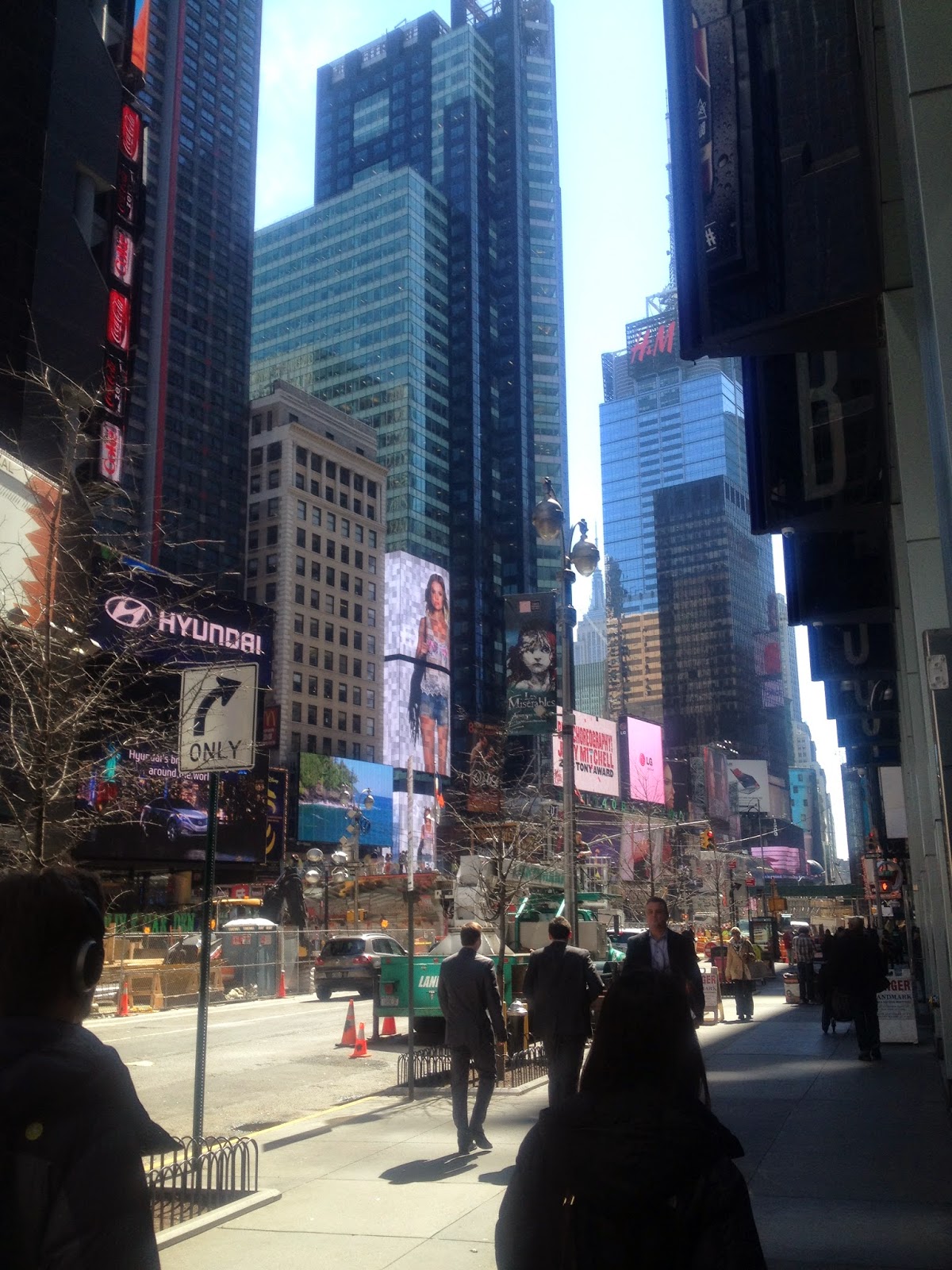 Like this world, this extreme world was passing by. I was just a blip. When I was Lyd things felt different. I no longer felt so invisible. But alone, schlepping around, very different. I perched on a block, in the sun, on Times Square. The NYC world flying by in all sorts of directions. This little perch, although just a cement block, felt like a quiet haven; away from the action (even if only a couple metres)- the bubble I needed. I munched on a spinach wrap, feeling small. I sat for a while and had a word with myself. Jess, you are in New York and it is time to get over your jet lag and immerse yourself in this city, this moment and experience. The traffic on the roads and the traffic of the pavements continued. Out of nowhere a nice man asked if he could share my stoop. He made some pleasant chit chat. Maybe I wasn’t so invisible. The man would not have known what his short dialogue meant but as I walked off, my state of mind and my jet lag had begun to shift. I walked through the crowds, finding my feet and my way home with ease. The next morning, juice in hand, I waited at the subway. I was heading for my first NYC yoga class. A busker was singing Carole King’s “You Got A Friend”. His voice was beautiful, as was his playing of the guitar. It was so special. Special not just for me; I noticed he had a little crowd. Then, this appreciative crowd applauded, some commented and quite a few dollars went his way. I was smiling to myself and boarded the subway, heading downtown. Once lost and now found, here in New York City.

“He looked around the empty plaza again, feeling less desperate than before. This wasn’t a strange place; it was a new one. After all, what he had always wanted was just that: to know new places.”
The Alchemist 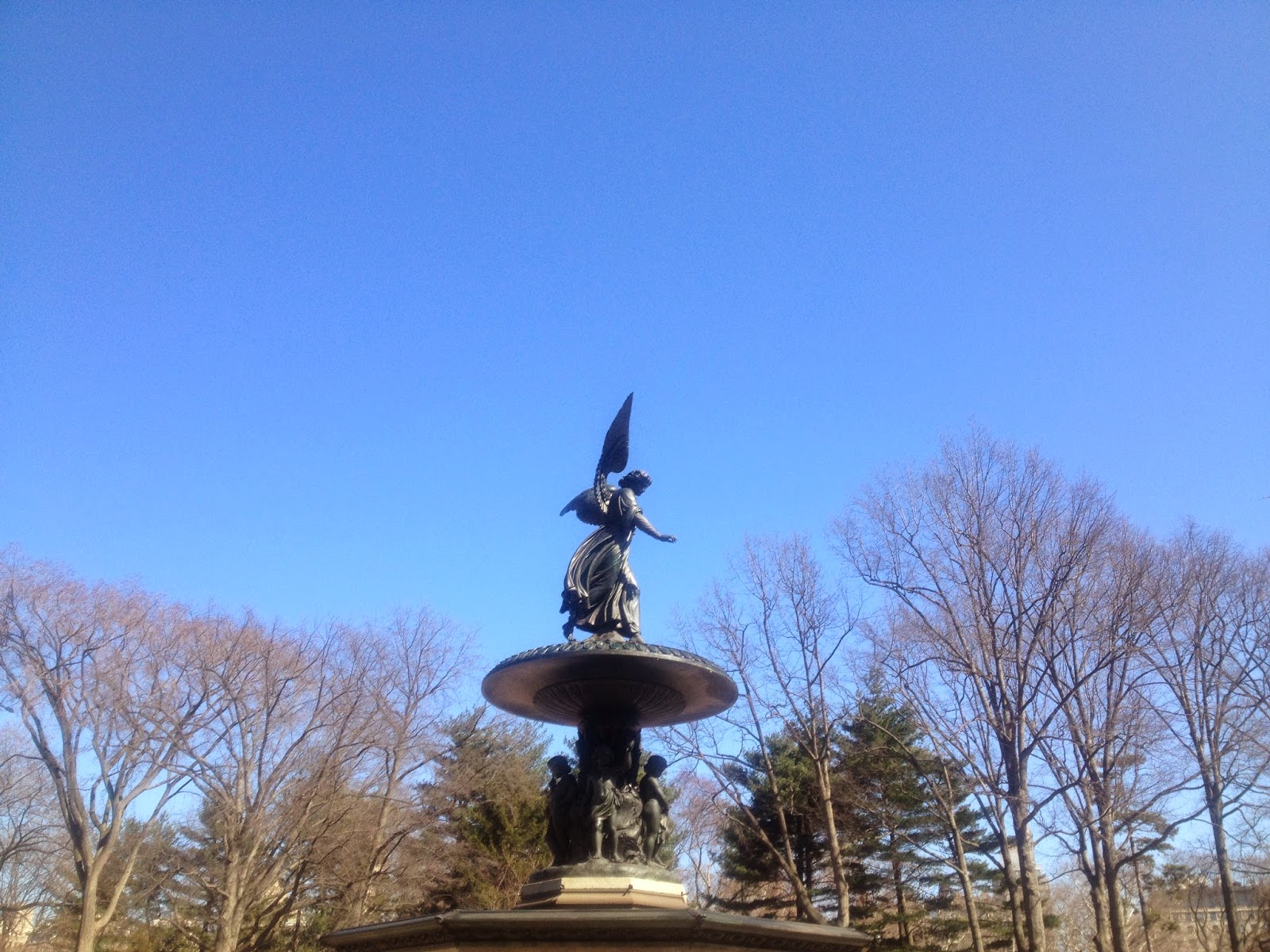