This Is A (Wo)Man’s World: Shared Parental Leave ~ An Interview with Peter Rafferty 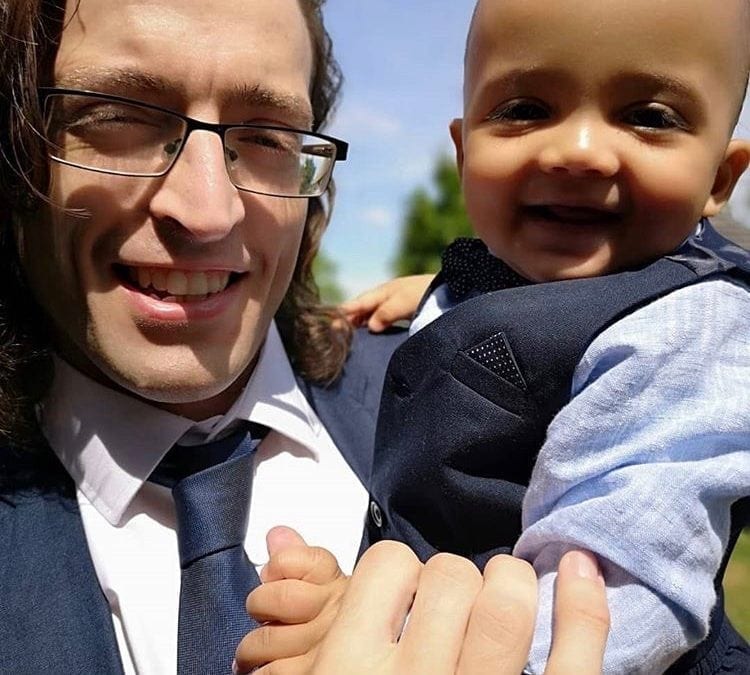 Meet Peter Rafferty, aka ‘Aquaraff’, the man that brought an awesomely illustrated theme of the week to the studio! WE had so much love in the studio for his artwork; it was widely enjoyed amongst our community. Initially, I spoke to Pete about creating the theme that we went for this week: ‘This is a man’s world, but it ain’t nothing, nothing without a woman or a girl.’  There was ideas for some writing, some things to share, thoughts and discussions around this… BUT I felt a little unsure about how to make it not so contentious.

So Pete produced the lovely, ‘Why blend in when you can stand out?’ Which for me was potentially broaching the subject of gender differences. Pete does stand out. For loads of reasons. Great ones: he is positive and open, caring and kind. And the reason he is here standing out to me stems from when he asked if he could come to my Mama & Baby class. It was the first time I had been asked by a dad. Pete had taken Shared Parental Leave to care for his baby while his partner, Klara, went back to work. I wondered what his journey had been like looking after baby Seth and here is some really insightful stuff. Tell us about how the decision came about for you to have shared parental leave.

The decision to take shared parental leave was quite a simple one my partner didn’t want to take 9 months off. I heard something on the news before Seth was born about the ability to take shared leave being made available and it stuck in my mind.

So once he was going to arrive we discussed it  My partner earns more than I do and has better potential to earn, also she loves her job, I like my work but maybe not the company as much. So the idea of taking time off both made sense financially and emotionally for me to have time away to think (you do a lot of thinking as a new parent- half of it paranoid

)
I spoke to other people men and women. But speaking to dads who didn’t have this opportunity evaporated any doubts I had. Every one of them would have jumped at this had they had the opportunity. They all longed to have had more time with their kids especially at the beginning.

Here I was with this chance to spend time with him  didn’t know he was a him at the time ) and enjoy those moments so I could try and be there for him and be a good dad the way mine was for me.
Easy choice to make in the end. What was it like setting up the leave from your work?

Setting up the leave was an interesting experience. Technically it wasn’t complicated, however being the first man in whole company to do this caused a few issues. Firstly they didn’t have the forms so they had to write them up . Now you’re supposed to give them at least 4 months notice. I told them in July 2017 starting leave March 2018 plenty of time. Got the forms December 2017- just before Christmas!! Had these filled in and done in Jan back from Christmas. Cue 4 weeks before I’m due to go. They finally sent me the declaration stating it had been agreed. Fun time . I can’t say this will be the same for all, but for me haste was not a virtue of the HR department. Although very helpful with any questions I had as the process went on .

In terms of the leave being received . Most people were just surprised, surprised at me for taking the leave and also at my partner for not wanting to stay off longer. Including my own family (supportive as always) bit still a bit like, ‘Ohhh really is that ok?” As this isn’t something that many men do. (As a note in Sweden this is common place I looked at documentaries about this and they’ve been doing it for years ) But then once people get over it everyone was like, “Go you!” “Lucky!” “Awesome!”. Even had people expecting a child after me go, “Hmmm, spoke to my partner we may do the same. “So if I get even a few other guys to think about this, then good, more the merrier! What do you even think of the term stay at home mum/dad?

The term “stay at home” either mum or dad is a bit fun mainly because we didn’t stay at home . We were out all the time. It does make it sound a bit old fashioned has a 50’s ring to it. I was just a dad looking after my kid! I still am at home or otherwise !

Days with Seth have a good mix – there’s a lot of mucus and other bodily fluids and steadily more movement. The main thing about days with him are they are increasingly more active (more for him) and me just chasing him around. It’s a constant learning process as he develops. His likes change, his voice starts to come through , his habits change, he’s also subjected to more and I get to see his reactions . We go swimming , go to music class, play groups, I take him to the gym with me and regularly go for little walks. It’s enjoyable every day even when it’s not. Even when he hasn’t slept or he’s teething so I haven’t slept and I’m irritable,all he had to do is chuckle or smile and I’m done that’s it days good again! You start off and its mostly EAT SLEEP POOP REPEAT. But know where at 10 months old he needs entertaining just as much as me and being fair to him and not ignoring. His needs because I have needs entertaining is tricky. I spend a lot of time on the floor stopping him trying to eat cats, plugs, hair, bins, cats again, cat food, shoes, phones, iPads, cups, dvds the list is as long as all items in my house. But we sit and play in-between trying to do little jobs. If I have to tidy up he comes with me and helps (by help I mean we play hide and seek by me throwing shirts on him and then putting clothes away! Best game ever ) Tell us about the baby groups you have attended.

Baby groups – these are great for a few reasons

.
For me the groups aren’t about me they are about Seth (I’ve seen parents coming pop a kid down, chat to friends and kid runs off ). I get why they do this  to have a break to socialise. For me that’s not how I get that interaction. So those days are for him for us to play, to sing Disney songs, get messy, go swimming . He loves swimming unless it goes up his nose.
I do find these groups can be a bit clique , NTC groups or Antenatal classes stick together .
As the lone man, quite often don’t always get in the cool kids club to have little chats. But people are very nice just not always sociable.  I have had moments of, “Can all the mummy’s wave?” or “Hello mums!” and then a loooong pause and, “Oh yeah, dad too.” It only really happens at the first visit.
I’ve noticed more dads being there as I’ve gone on but for a long time it was just me. Dads are often, “Wow, you come by yourself. ” Well, yeah. Because otherwise he wouldn’t get to do this.

So there is a mild stigma in these groups but it doesn’t take a lot for it to be broken down .
I love his classes. They show me his development, and his reactions to new things. I’m always looking for something new!

What would you say to other parents and carers that may be considering shared parental leave?

Advice to other dads:- Do it. Take time to be with them . Do stuff on your own so you get those moments to be like he did this or look at this, it’s cute. Any reason you can think of not to do it isn’t enough of a reason  You can take months off, if you can’t afford that take weeks, find a way. The thing people kept saying to me was you don’t get this time back. They are right- you don’t. I could have a bit more cash or I could have these moments with him. Easy answer always him always him and my partner every time. I’m the one who takes him swimming and go to music that’s mine, my partner goes when she can. But those things are ours and they are my favourite days. So, I found my way with an illustration, and broached the theme to consider. As much for me as anyone else! Issues can provoke. And whether it is gender or anything that makes us different from each other…. Well, that is what keeps things interesting. And you know, when you flip things on the head or cosy on into something that is considered more “normal”, both have a place.

And when you are open and positive? Just like Pete, you can break down barriers. Because that is what we should be doing, right? Not building walls. “…there is a mild stigma in these groups but it doesn’t take a lot for it to be broken down.” ~ Pete Rafferty I LOVE THIS… Thank you Pete for sharing this journey with us! 🙂